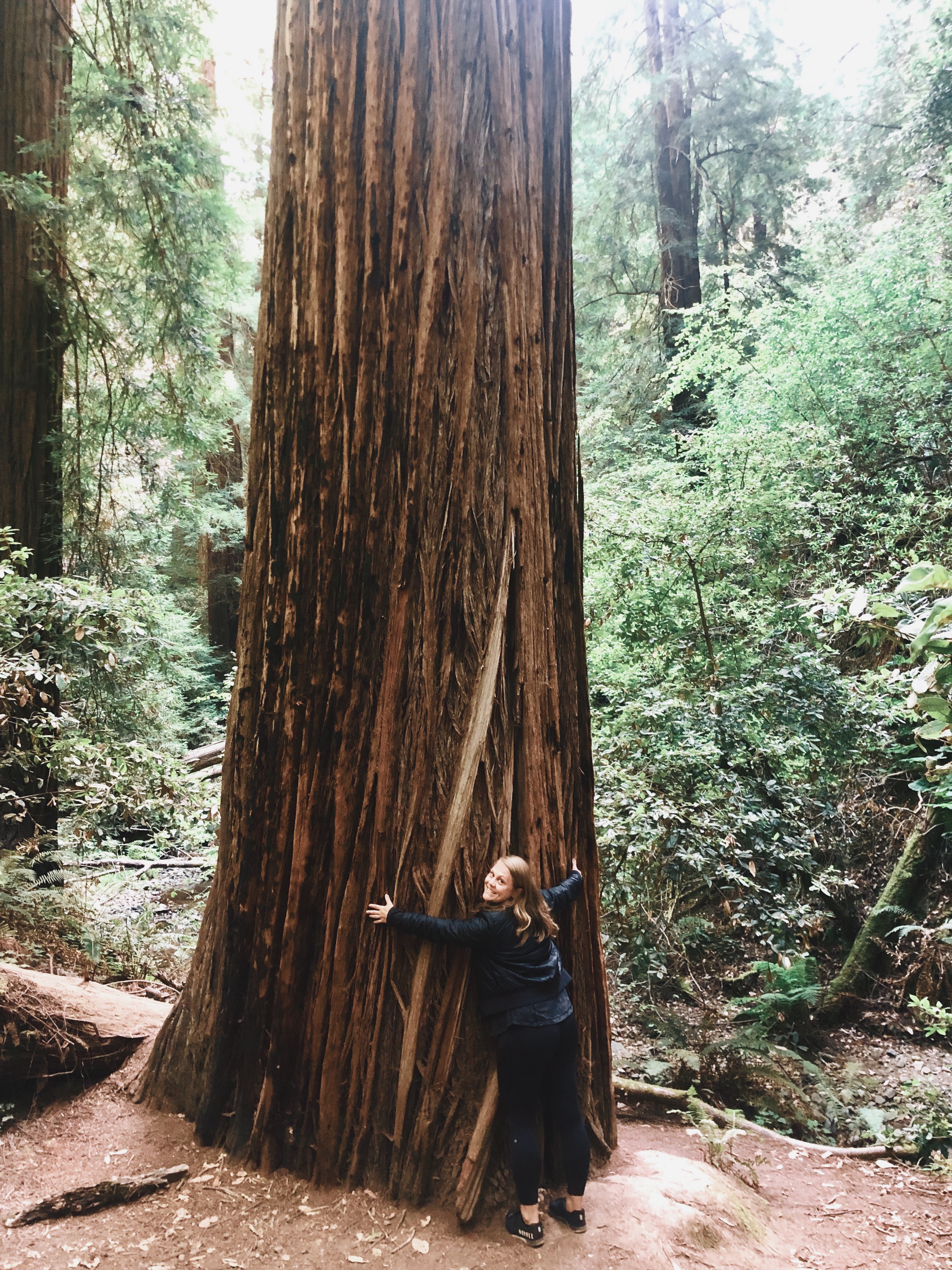 Today was probably my favorite activity out of everything we did in San Fran (although the walking tour of Chinatown is a close second thanks to our informative yet very funny guide Linda).

Since we didn’t get to go to Yosemite on this trip as planned (biggest bummer of my life), this was the only outdoorsy thing we did and it was the highlight of the trip for me … so I (kindabutnotreally) apologize for how many pictures of trees you’re about to scroll through.

If you’re in the market to see giant trees, there are a few different options in Cali. Although they’re usually just called “redwoods,” there are two different species – the coast redwood and the giant sequoias.

So what’s the difference?

Giant sequoias only grow in the Sierra Nevada Mountains near Cali’s eastern border. They’re the largest living things on Earth, reaching 280 feet tall and 23 feet across (although the largest of them are closer to 300 ft tall and 30 ft across!). The oldest giant sequoias are around 3,000 years old. You can find these massive trees in three groves in Yosemite – Mariposa Grove, Merced Grove and Tuolumne Grove. You can also head to Sequoia National Park, the home of the largest living organism on the planet by volume: the (est.) 2,000-year-old General Sherman. We did not get to see giant sequoias on this trip.

We did get to see coast redwoods. Although they don’t usually get as wide as the giant sequoias, coast redwoods are the tallest trees on the planet. The tallest one, located in Redwood National Forest, is 380 ft tall — that’s as tall as a 37-story building! Like sequoias, these trees also live thousands of years. Try to imagine that. Thousands of years. What’s even more mind-blowing is that coast redwoods as a species have been on the planet for more than 240 million years (like, they were around when dinosaurs existed). Along with Muir Woods and Redwood National Forest, you can find these trees in Humboldt Redwoods State Park and Big Basin Redwoods State Park.

Since we were staying in Mill Valley just across the Golden Gate Bridge from San Fran (about 12 miles north of the city), we chose to hit up Muir Woods, which was basically in our backyard.

After going to the Grand Canyon last year, I had set a goal to visit another National Park this year, which is part of why going to Yosemite was so important to me. While not a national park, Muir Woods has been a federally protected monument since 1908 (thanks to William Kent & President Teddy Roosevelt), it’s part of the Golden Gate National Recreation Area and it’s managed by the National Park Service. So, I’m counting it …

A couple quick facts about Muir Woods: It’s named after naturalist John Muir, whose environmental campaigns helped to establish the National Park system. It’s located on Mount Tamalpais in southwestern Marin County. It is 554 acres of protected forest; 240 of those acres are old growth coast redwoods. Most of the trees in the forest are 500-800 years old; the oldest is at least 1,200. Unlike many of the the other protected forests in the area, there are no camping or lodging facilities in Muir Woods; it is for day-use only so if you’re wanting to camp, you’ll have head to nearby Mount Tamalpais State Park.

Since you have to reserve parking in advance and I’d read that the hiking trails get crowded later in the day, we booked the earliest reservation time: 8-8:30am. (Muir Woods hack: there’s verrrrry limited wifi access in Muir Woods, so you’ll need to print your parking reservation & entrance tickets, if you bought them in advance, before getting to the park because you may not be able to pull them up on your phone.) Luckily, our AirBnB was in Mill Valley and we were just a couple miles from the entrance to Muir Woods, so getting there between 8-8:30am wasn’t too difficult. We even had time to hit up Fred’s Coffee Shop again for breakfast; we just had to have a second helping of Fred’s Special Bacon!

Although known for old-growth coast redwoods, approximately 380 different plants and animals call this place home. Growing alongside the redwoods, you’ll see Douglas-fir, big-leaf maple, tanbark oak and baylaural trees. And white we did see a ton of trees, obviously, about halfway through our hike we were surprised to realize we hadn’t seen any wildlife in the woods – no birds, insects, squirrels, nothing. Turns out, the reason for this is most of the species living in the forest are either nocturnal or burrowing animals living underground or under the dense growth on the forest floor.

There are quite a few hiking paths to choose from, they fork together and loop around, depending on how many miles you want to log. We decided to take the Fern Creek Trail to Camp Eastwood, which was about 5ish miles total from the visitor’s center and back. Starting out, you’re on a boardwalk-like path that runs alongside Redwood Creek. You can see our approximate hiking route, as well as the extensive hiking trail options if you click on the map to the right. I’ve highlighted in yellow our path.

Following marked trails is extremely important in Muir Woods. Why? Because coast redwoods have very shallow tree roots, often only five or six feet deep; but they are very wide, extending out up to 100 feet from the trunk. Stepping off of the trail and onto these shallow roots can damage them and end up potentially killing the tree. So, although you see us very close to these trees – even inside them – we were on the marked path and in no danger of damaging tree roots.

Camp Eastwood was our halfway point milestone. I don’t actually know if it was halfway through our mileage, but it was the point at which we essentially turned back to head toward our starting point. This spot was named after Alice Eastwood and is the original site of a “gravity” rail car line that carried passengers to the top of Mount Tamalpais and down into the Muir Woods in the early 1900s.

^ This is currently my favorite picture of all time because it is so cheesy and Ruben hated doing it so much. That’s the face he makes when I make a joke at his expense that he actually finds funny, and it’s my favorite face he makes because it’s rare but oh-so-satisfying and adorable.

And that’s it. We finished our hike and you survived all the pictures of me with trees. Congrats.

My boyfriend made a YouTube video if anyone is interested in watching 26 minutes and 40 seconds of our vacation.