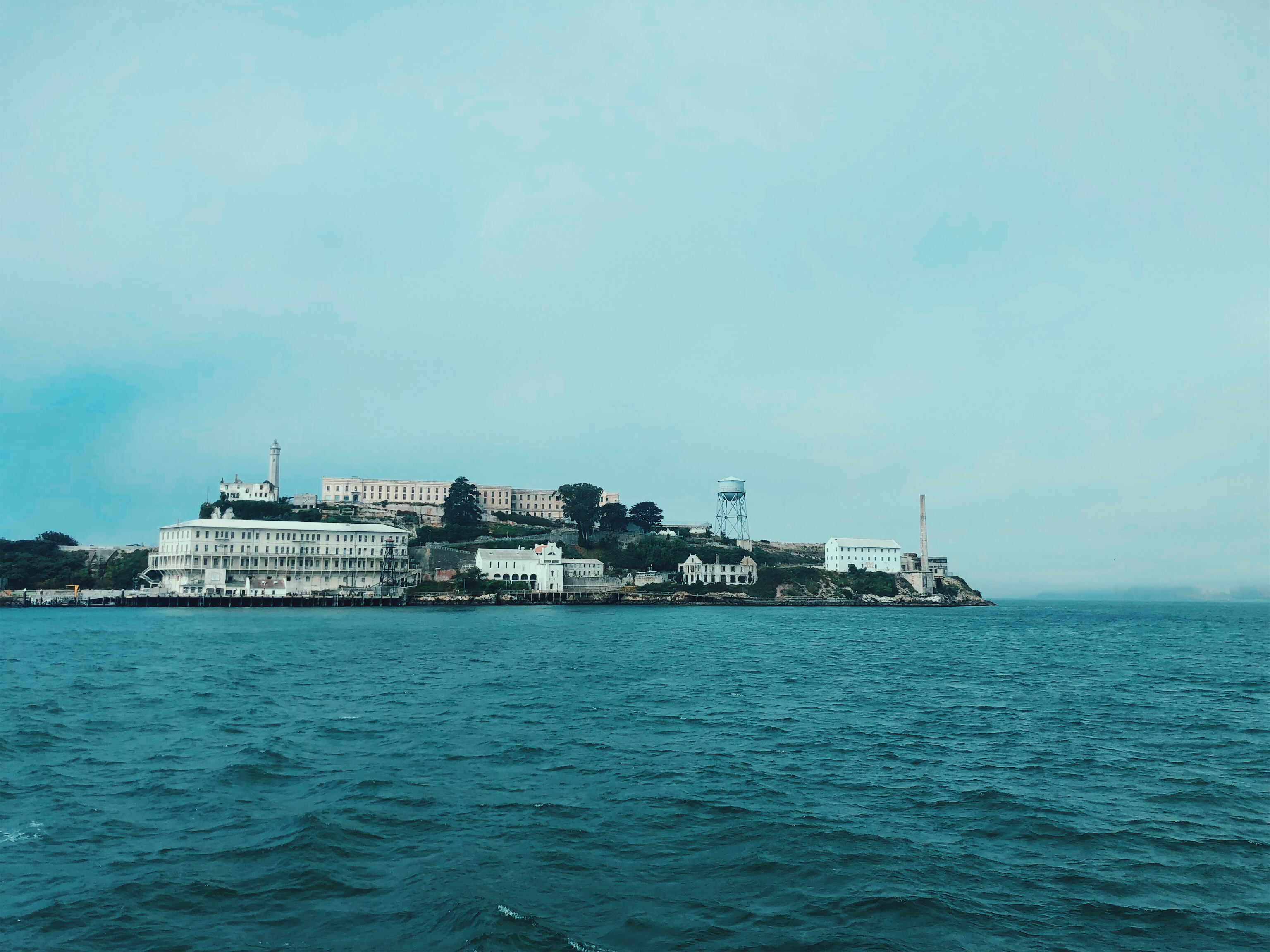 It’s our first full-day in San Fran and we’re starting out with an Angel Island + Alcatraz Island combo tour that we booked through Viator.

Angel Island is the largest natural island in San Francisco Bay (it’s about 33 times larger than Alcatraz Island). And it’s basically the Ellis Island of the West Coast. That’s obviously way over simplifying it, but historically it’s fairly accurate.

At different points in time:
– it was a cattle ranch,
– it was an army fort called Fort McDowell,
– it was home to a Nike missile station (bombs designed to shoot down nukes, none of which were ever deployed),
– it served as a quarantine station to screen Asian passengers for the Bubonic plague before entering the U.S.,
– and, finally, it served as a a U.S. Bureau of Immigration inspection and detention facility which processed immigrants from 84 different countries, approximately one million being Chinese immigrants.

[ I wore the lululemon Every Moment Crew in the color Lavender Grey today. I already had this sweatshirt in black & am obsessed with it, so I used this trip as an excuse to get a second color. Madewell Curvy Jeans + RayBan Clubmasters + Target Nyla Ankle Strap Sandals]

Alcatraz Island, aka “The Rock”, is located in the San Fransisco Bay, only about 1.25 miles off the coast of San Francisco. The 22-acre island was once a fort, a military prison and a maximum security federal penitentiary. And, for about 19 months beginning in 1969, it was occupied by a group of Native American activists from San Francisco as part of the protest for Native American civil rights. Today, it’s part of the Golden Gate Recreation Area and is managed by the National Park Service.

Although there are other buildings on the island, the main attraction is the award-winning audio tour of the main cellhouse. Although taking an audio tour sounds kind of lame, it was actually really cool to hear stories from two very different perspectives – prisoner and correctional officer. If you go to Alcatraz and don’t listen to the audio, you’ve botched it.

“Doing Time: The Alcatraz Cellhouse Tour” is narrated by four formers prisoners and four former correctional officers. The tour walks you through the general layout of the prison while former prisoners explain what life inside was like and former officers tell stories of escape attempts.

In the photos above, you’ll see a picture of a stone floor with pock marks and a picture of a hole in a white ceiling. Those are remnants of the “Battle of Alcatraz”, an unsuccessful escape attempt which lasted from May 2-4, 1946. These two pictures show where prisoners drilled holes in the prison roof and dropped grenades down onto the floor below. If you’re interested in the whole story, you can read it here.

During the audio tour, one of the former prisoners recalled how you could hear sounds from the mainland carried over the water by the winds. The pictures above show the view from the rec area looking out towards San Fran. It was a beautiful view for me today, but it must have been so horrible as an inmate to see that yet be stuck there.

The biggest surprise of the day was that Bill Baker, a former prisoner, was in the gift shop signing his book about life behind bars in Alcatraz. We met him, he made jokes about us being Georgia peaches and signed a couple books for us. (Don’t worry, mom, he didn’t kill anyone … that I know of.) According to the events program announcer, Bill is one of 5 guys who served time on the island who is still alive today.

After getting off the ferry back from Alcatraz, we walked over to Fisherman’s Wharf for a quick dinner at Chowder Hut to warm up over some crab chowder and other seafood, then headed to Ghirardelli Square for dessert. (Note: the “Lands End” Salted Caramel Brownie Sundae is amazing, but the Decadent Drinking Chocolate was not a crowd favorite.)

While in Ghirardelli Square, we saw a place called The Cheese School. Obviously I was immediately excited, but we didn’t have time to go inside. I did take (too many) pictures of and with the quotes on the front windows of the building though. I’ll only make you look at three pics, but there are (unnecessarily) plenty more.

After dessert, we walked down Pier 39 to see the sea lions. We learned that the sea lions migrate south for mating during the summer months, so there were far less of them than normal. But they were entertaining nonetheless. I also learned that shouting “Gerald” at sea lions is a must, according to the kids.

Welcome to Lost Vegas 🌸 🌺
Comfy flight ‘fit but make it fashion | lululemon head to toe
Plant mail is the best mail 🌱 Excited to add these two little Monstera standleyana albo variegata to the collection.
Does this count as meal prep? 🍕 | Which dipping sauce would you choose: Chedder Popped Jalapeño or Garlic Smashed Buffalo?